Aboriginal art is far more than simply dots and patterns.  The patterns and symbols are all significant in what is one of the oldest living cultures on Earth.   Their art can be geographical, autobiographical, mythological, spiritual, historical.   I use a range of multi-sensory activities as well as artefacts and personal stories to bring vibrant, contemporary Aboriginal culture to life.  I teach students about the art and then enable them to connect it with their own lives, adapting the outcome and expectations according to the age range and abilities of the children. 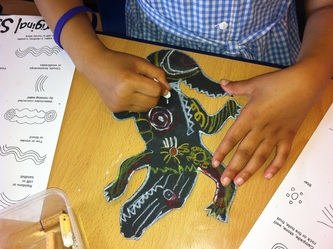 ABORIGINAL TOTEMS
Foundation stage/preschool - After exploring the idea of Aboriginal totems, signs and symbols, we use oil pastels and paint, in ochre colours, to create dotted and linear designs on totem outlines. 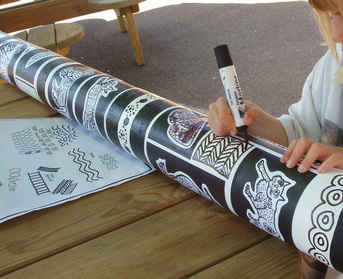 KS1 & KS2 After exploring totem animals and signs and symbols in Aboriginal art, we  fins out about Morning Star Poles and use fine liners to create dotted and linear designs on totem outlines.  These are then applied to prepared cardboard or plastic tubes and finished off with feathers and twine.﻿ 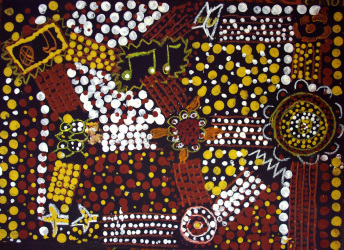 KS2 - Children look at maps and satellite images before linking them with the geographical nature of Aboriginal Art.

Children then learn to decipher Aboriginal art and identify common signs and symbols used.  They are encouraged to read the art in a similar way to maps

Children then create a piece of art reflecting journeys that are important to them, using the language of Aboriginal signs and symbols and the ochre colours of traditional Aboriginal Art. 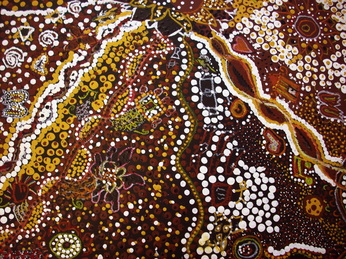 MEMORY MAPPING
KS2 - This workshop is for upper KS2 children and gives them an insight into the layers of meanings that might exist in a piece of art.

Children took at Aboriginal Art as a reflection of their culture and learn how to read the signs and symbols that are common in many Aboriginal cultures.  They will learn from a range of Aboriginal artefacts and learn about the ways in which narratives are expressed through Aboriginal Art.

Children then choose a story that exists in their own life narrative and design a way of representing this narrative using the signs, symbols and restricted ochre palate of traditional Aboriginal Art. 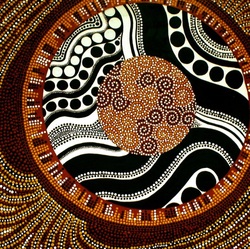 NEW!
ANCIENT SCIENCE - ABORIGINAL ART AND SCIENCE
My painting shown on the left is all about magnetism and our planet.  I enjoy thinking about my knowledge of the world and imagining how it might be communicated in an ancient way.  I enjoy seeing how the final piece makes me think about my world in different ways.

This is a new workshop that was first run as part of the Brighton Science Festival 2013.  Ancient stories and arts are often concerned with describing and understanding the world around us.  The scientific stories we tell each other do the same thing, only in a "scientific" way with "scientific" terminology and "scientific" diagrams.  Ancient peoples have understood the world extremely well, but communicated it very differently.  This workshop challenges students to take known natural scientific phenomena and try to communicate it in traditional, tribal, ancestral ways, using traditional ochre colours, patterns and themes.  They can be given a range of ideas across the sciences, or alternatively they can be asked to focus on facts around a current learning journey or learning quest.

KS2 - Children are presented with a range of Aboriginal paintings and artwork that describe scientific phenomenon in traditional ways.  They are then shown my own artwork that explores phenomenon as diverse as genetics, geography, magnetism and ecology.  We find out how we can take what we know and describe it using only ochre colours, but thinking carefully about how we combine the colours and patterns.  The children sketch out their ideas before using pastels and paints to describe a scientific theory, idea or fact.

This is a lovely workshop that can be accessed at many different levels.  Those children who are creative, but may not feel confident about their drawing and paintings skills can find that they excel in this 3d workshop.  The repetitive nature of wool wrapping ensures that even those children who have poor motor skills are able to practise and refine their skills over the course of the day.   I have found that, given a broad and relevant brief, boys and girls alike find this workshop particularly exciting as they invest their time and energy creating a character that they relate to in a very personal way.

"Are we making the angels today Miss Walton?" Asks a year 6 boy on the stairs.
"Yes" I reply.
"Yes!" He exclaims emphatically, grabbing the air with his fist and pulling it down.  Other boys on the stairs also get very excited.

This happened several times over the course of our sessions in Somerhill, several years running - I had showed the students angels by Gormley, Blake and Banksy to ensure they didn't see angels as girlie Christmas characters - we had many interesting discussions about the idea of angels as this was a cross curricular unit that linked with RE and PSHE. 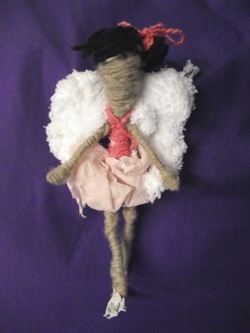 WIRE AND WOOL - figures and creatures
KS2 - Children love designing their own creatures or characters.  With this fantastic workshop they can do this and then bring them to life as a 3d textiles sculpture.

They learn how to create a wire armature before choosing appropriate colours and textures of wool and other materials, wrapping these round their armature.

This workshop is excellent in aiding the development of fine motor skills and 3-dimensional thinking.  It can be linked with characters in texts or more general topics about animals and habitats. 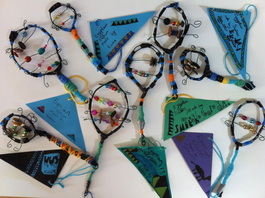 ﻿WIRE AND BEADS﻿ - Egyptian sistrums
KS2 - Year 4 and above - This very engaging workshop enriches any work on Ancient Egypt and enables children to discover how music was used and developed at this time.  They will learn about the spiritual and essential use of the sistrum in Ancient Egyptian ritual as well as learning about other Ancient Egyptian musical instruments.

After finding out about the history and spiritual/magical uses of sistums in Ancient Egypt, each child makes his/her own beautiful sistrum.


PAGE AND STAGE - KS1 & 2
Vital projects that bring in local performance poets to inspire your children, especially boys, getting them excited about creative writing.  Using male poets can make a huge difference to the perception that many boys have, that poetry and creative writing is somehow either babyish or girlie.  Local rappers and young performers can transform perceptions about writing and encourage reluctant writers to give it a go.  I can provide 30 minute assembly performances followed by workshops by myself and a male poet focussing on writing and performance.  We can focus on particular targets in literacy, for example use of metaphor and simile and engage children in writing creatively and performing confidently. £200 for a two poet performance in your school  This is reduced to £170 (per school) if you get together and book two performances on the same morning with another schools and £150 (per school) if you manage to encourage another school to book a performance on the same day.  This could mean we perform at two schools in the morning and one more in the afternoon.  To have a performance plus half a day of workshops by those 2 poets would be £350 for the whole day it would cost £500.

MESSING WITH METAPHORS
This workshop was developed and delivered at The Dome, with all the participants talking about how exciting it was and how it made the environment seem magical and exciting.  Using any environment, we take an imaginative walk around the location and look for evidence of alternative realities.  Children gather ideas, sharing them and helping each other release their imaginations before structuring them into poems to share with their peers at the end of the day.  They are also given some handy hints and help with honing their performances.

These workshops are coming soon - please let me know if there is a particular aspect of British pre-history you would like my workshops to address.  At them moment I am looking at the development and meaning of petroglyphs and the ancient understanding of the seasonal cycle of the year as well as ancient understanding of the moon, stars and planets.

KS2 - Monoprint can be used to explore many different subjects.  I have found that landscapes and seascapes are particularly effective, although the textures of creatures could also lend themselves to monoprinting.  It can be used with KS1 and 2.
NB this workshop has an introduction that is given to all the children involved in an initial presentation.  They then work with me in groups of upto 10 depending on the number of children taking part.

MUSIC - KS1&2 - I am able to offer different workshops to enhance your music curriculum - they can also be used to provide training for inexperienced or unconfident teachers. 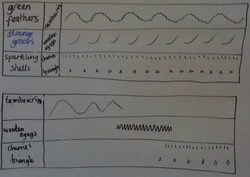 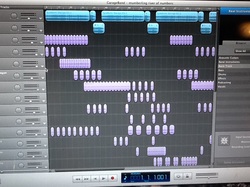 NB for this workshop I do not supply iPads for the children to work on - you will need to have these in school, loaded up with Garageband and booked out for the workshop beforehand.

Samba - KS2
Children learn to play in different sections of a samba band.  They learn where Samba comes from, simple cues and whistle commands and develop rhythms based on phrases taken from their learning journeys.

Songwriting - KS2
Children learn the basics of either the development of protest songs or the blues.  They then write verses based on a particular structure and learn about chord progressions as they work collaboratively to make a melody for their verses and choruses.  The final song is recorded on MP3 for them to keep as a record of their achievement in this one day workshop.

Sea Shanties - KS1&2
Children learn a selection of sea shanties to enhance their studies of the history of their city.